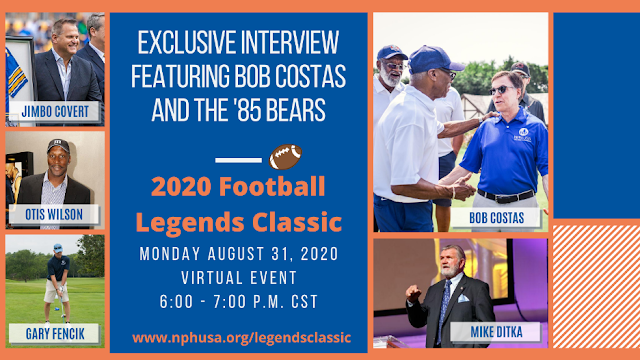 Join us for the NPH USA Football Legends Classic on August 31, 2020 at 6:00 PM CST for a virtual edition of our annual event, which has raised over $1.5 million to date! The event will feature an exclusive interview with legendary sportscaster and NPH supporter, Bob Costas and members of the Super Bowl winning 1985 Chicago Bears! The featured interview includes Coach Mike Ditka, Gary Fencik, Otis Wilson, and Jimbo Covert, along with other special guests and many opportunities to give in support of our mission.

In 1971, Michigan State University football teammates John Shinsky and NFL Hall of Fame member Joe DeLamielleure discussed their dreams for the future. It was at that time that John told Joe that one day he was going to build a home for orphaned and abandoned children. That dream became a reality with the building of the Shinsky Orphanage in Matamoros, Mexico. In 2009, John partnered with NPH and its’ American fundraising arm, NPH USA, to combine their unique resources and strengths for the shared mission of transforming the lives of children in need.

Each summer for the past seven years, good people with big hearts have gathered together to support the mission of Nuestros Pequeños Hermanos with a day of golf in Chicago, shared with NFL legends from around the country. This event has continued for many years, thanks to Shinsky and his love of football, friendships, and supporting children in need. While we cannot gather this Summer physically due to pandemic restrictions, the important thing is that we do gather, because the children are depending on us.

This year, the Football Legends Classic will be a jam-packed, one-hour virtual extravaganza that brings all the excitement of our annual event right to your home. The feature presentation will include an NPH exclusive interview with Bob Costas and members of the ’85 Bears. There will be messages from our NPH USA family, information about this incredible organization and the children supported by our programs, and an auction to raise funds for our homes. This is truly an event you don’t want to miss!

Bob Costas is the voice of Major League Baseball for which he has won multiple Emmy’s, and has also been the prime-time host of 11 Olympic Games from 1992 until 2016. His rise to fame came in 1980 when he got hired by NBC sports but left the company after 40 years. His notable play-by-play calls include Game 6 of the 1998 NBA Finals, Michael Jordan and Phil Jackson's final game with the Chicago Bulls, Game 7 of the 2000 Western Conference Finals, and Derek Jeter's final game at Yankee Stadium, amongst others. Costas has some interesting ties with the city of Chicago. Costas was the play-by-play voice for the Bulls on WGN-9 during the 1979-80 season. He called several Bears games with Johnny Morris during a short stint with CBS in the late '70s. The first Super Bowl he hosted for NBC was the Bears-Patriots game in January of 1986. He called the famous Ryan Sandberg game for the Chicago Cubs where Sandberg hit game-tying homers in the ninth and 10th innings. He says people still bring that game up when he walks the streets of Chicago. He is also a legendary friend of NPH. Costas has visited NPH Guatemala with his daughter, sponsored several NPH children, and was the emcee for this event in 2018.

Arguably the most popular Super Bowl victors ever, the 1985 Chicago Bears were a legendary team that finished the regular season with a record of 15-1 and went on to dominate their playoff and Super Bowl opponents in the post season. NPH USA is excited to feature some of the instrumental individuals from that year during the 2020 Football Legends Classic!

You can't tell the history of football without mentioning this Hall of Fame coach. Mike Ditka coached the Bears for 11 seasons from 1982-1992, leading them to numerous division championships and most notably the '85 Super Bowl win. Before he coached, Ditka was a phenomenal tight end in the NFL for 12 seasons. Ditka has worked for many years in television for ESPN, and in 2016 they announced he would move to SportsCenter for remote-broadcasting analysis. Ditka has also done guest spots and cameos on shows from L.A. Law to Saturday Night Live, as well as the TV classic, Cheers. He helped produce a line of cigars called "The Mike Ditka Kickoff Series", a line of wines, and opened his namesake Gold Coast Chicago steakhouse in 1997. Ditka very recently became an owner of X League, a women's tackle football league. This will be Ditka’s first stint with NPH.

8-year Chicago Bear veteran Otis Wilson played an important role in making the '85 Bears defense one of the most notorious units in league history. A first-round pick to Chicago in 1980, he had a successful career in the NFL, being selected for the Pro-Bowl once in '85 and named "All-Pro" twice in his tenure with the Bears. He was also a featured star on the hit music video "Super Bowl Shuffle" in '85. He now focuses full-time on his nonprofit organization, "The Otis Wilson Charitable Association", which provides an all-inclusive health and fitness program for at risk youth. The organization sponsors many events to fund their programs and they are very active in the Chicago area. Wilson's book "If These Walls Could Talk: Chicago Bears" was published in 2017. He also appeared in the tv show "Hawaii Five-O" as himself in 2016. Otis is a friend of NPH, last attending our Football Legends Classic event in 2018.

A legend in his own right, born and raised in Chicago, named captain of the touted '85 Bears defense, Gary Fencik is the all-time leader in tackles and interceptions for the Bears franchise. In his 12 seasons with Chicago, Fencik was selected to the Pro-Bowl twice and nicknamed one of the "The Hit Men" along with teammate Doug Plank for their brutal hits on opposing players. Fencik lead a busy life outside of football as he graduated from Yale in 1976, was awarded a gold record and a platinum video award for the 1985 "Super Bowl Shuffle". Post NFL he has been outspoken in raising awareness for concussions and the long term affects they can have on a person. He has also pledged to donate his brain after he dies to the concussion legacy foundation to further study the effects of concussions and CTE. He joined Adams Street Partners in 1995 and currently works on investor relations for them. Fencik is a familiar friend of NPH and attended the Football Legend Classic event in 2019.

James "Jimbo" Covert, a lifetime Bear, played all 8 of his NFL seasons with Chicago, starting in 1983 where he was a top 10 draft pick. Covert was an important piece playing at the offensive tackle position, pushing them to be one of the most respected offensive lines in the league. In his 8 years, Covert was a 2-time Pro-Bowl selection and even earned the "Miller Lite Offensive Lineman of the Year" award in 1986. He played his last season in 1990 and announced his retirement a year later due to back injuries. Covert left a great legacy, as he was named to the 1980 "All-Decade team", enshrined in the College Football Hall of Fame in 2003, and named an NFL Hall of Famer this year, in 2020. Covert found a life after football in the healthcare industry. In May 2007, he was named President of The Institute for Transfusion Medicine, a non-profit organization specializing in transfusion medicine and related services in the Chicago and Pittsburgh area. He also started Keystone Strategies, LLC, a healthcare consulting group in 2000. Covert has participated with NPH USA’s Football Legend Classic event in past years.

We encourage participants to safely be a part of this event from their homes, or host socially distanced watch parties. We are also providing Watch Party Packages for those who want to enjoy the event with their very own Football Legend, among other perks!

Visit www.nphusa.org/legendsclassic for registration and more information about the event.

Can't wait for you to join us!

Email ThisBlogThis!Share to TwitterShare to FacebookShare to Pinterest
Labels: events