In spring, 2016 NPH USA created the Diversity Taskforce within our International Volunteer Program. The goal of our taskforce is to help ensure that NPH and NPH USA are diverse organizations that reflect the children that we serve and love.
NPH volunteers from around the world are a diverse group, and don't always fit the stereotype of how others may expect a "gringo" volunteer to look. Volunteers of color can face stereotypes, awkward questions and lots of teachable moments about race and ethnicity while serving at NPH.  Former volunteer and Diversity Taskforce member, Kimmie, shares some reflections from her volunteer year in Honduras in 2010-2011.

"You look like Mulan.""Are you related to Jackie Chan?"
"Put your hair in a bun like they do in your country."

It never occurred to me that my race would come up as a volunteer at Nuestros Pequeños Hermanos Honduras. I’m mixed race (Asian and white), but it honestly hasn’t been much of an issue in the United States. Don’t get me wrong – I’ve experienced a slew of microaggressions (mostly of the "Where are you from? No, where are you FROM?" variety). Most upsetting were the occasions when people wanted me to explain why I didn’t speak Vietnamese. Because apparently bringing up someone’s painful family history is an acceptable consequence of satisfying one’s own curiosity. But I won’t pretend to have it as bad as many people of color in this country do; no, if people make assumptions about me, they tend to be positive.


So imagine my surprise upon arriving at El Rancho Santa Fe and immediately being labeled “la china.” And yes, every one of the above statements is a direct quote from a pequeño. I remember one night early on in my volunteer year, all the kids gathered in talleres (workshops) to watch the latest Karate Kid movie and every time the little Asian girl appeared, I would hear shouts of my name. It was crazy. I don’t even think I look particularly Asian (I know that most people who ask about my heritage just want to know why I’m brown). It wasn’t just on the Ranch. Walking around the streets of Tegucigalpa, people would frequently point at me and refer to me as “la chinita.” I kind of get it. Honduras has a surprising number of Chinese restaurants run by immigrants. Latin Americans are used to gringos looking a certain way (blond, blue-eyed). I suppose they were trying to make me fit into their schema somehow.
I did my best to clarify. My dad is Vietnamese, a refugee of the war. My mom is white. Both are American, as am I. This sometimes backfired. One night, I was eating with the boys in the hogar Arca de Noe and my ethnic background came up. 12 year-old Carlos insisted I must be Chinese. I explained that I was half-Vietnamese and that Vietnam is a country to the south of China. “Ohhhhh,” he replied. “I know. You’re a geisha.” Another volunteer tried to delicately explain what a geisha was, which only resulted in him requesting that I paint my face and entertain him. Fail.


Despite incidents like these, I did have my share of success. I worked in the hogar for the oldest girls, Hijas de Pilar. I developed incredibly close-knit relationships with my girls. Through those connections, I was able to share my background with an audience that cared about me and wanted to understand who I was. It was incredible to watch the girls jump to my defense. When a young boy asked me to say something in Chinese, María explained, “She’s from the States. She speaks English.” Sometimes they were a little too forceful. Upon hearing me called “chinita”, Sara exclaimed, “She’s Vietnamese, you moron!”
As a volunteer of color, you have to walk a fine line. You want to be respected and have your identity honored, but you have to remember you are in a foreign country with its own cultural norms. In Honduras, it’s quite common to use nicknames based on appearance. One of my girls was “Pecas” (“Freckles”) and a dark-skinned boy in the baby house was referred to as “Frijolito.” This might be considered offensive in the U.S., but we have to be careful that we’re not trying to bestow wisdom on the ignorant natives (hello, Savior Complex). I also recognize that it’s problematic to ask people of color to constantly educate. It’s never bothered me personally, but I think it’s inappropriate to make assumptions about whose job it is. I’m okay with taking on that role, especially with kids, because I know their questions come from a place of curiosity rather than malice. 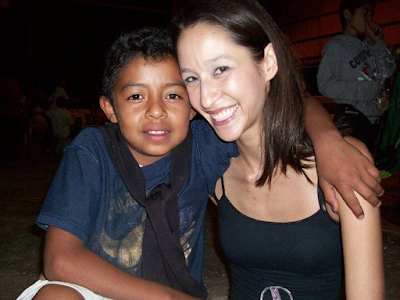 Being a volunteer of color was definitely an interesting experience, but it didn’t define my year. What defined it was relationships. Relationships like the one I had and continue to have with Carlos. He still calls me Geisha, but it’s now a tongue-in-cheek term of endearment. He recently drew this picture of me as a new mother. He sees my race, but he sees me too. And that’s what’s important. 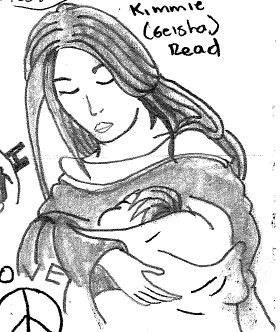