It was hard for me to fathom how so much compassion and humility could fit inside such small bodies...

Below is a blog post written by Upper Midwest Associate Board Member Katie Lawler.

Silvia told me that earlier in the day, every few hours Claude would ask her how long it would be until we got to Kenscoff.  When she and I were walking out of the hospital with him, she had to tell him three times to slow down so that we could keep up. His excitement was palpable, and it was a happy ride out of the heat of Tabarre and up into the fresh air of the mountains.


Arriving to find a home of twenty running shouting little boys was a rude awakening, however. Overwhelmed by the disorder, he shrank back in apprehension and pressed himself into us as if trying to disappear. When Silvia and I took him to the clinic to get his medications organized with the nurse, he fell apart completely and melted into my lap, crying in despair. The next day, I could see the salt marks from his tears on my black skirt. We tried our best to distract and console him, but it was no use - his shrieks when they finally peeled him away from us were heart-wrenching.
Later that night when the younger boys were getting ready for bed, we went back to check on him. He was calm, subdued. When his caretaker told him that it was time to bathe and put on his pajamas, he stood motionless, small head hanging, and frail shoulders hunched. I was about to move to help him start undressing when I saw another little boy already in motion. He knelt down in front of Claude and started patiently taking off his shoes. When he got down to the socks, he folded each one neatly and placed it inside the shoe. When Claude got back from the shower and stood shivering in front of his bed, a second little boy arrived with a towel and gently patted Claude dry.  He then helped Claude put on his new pajamas, taking care to button each button and to straighten Claude's collar when he was done.

I stood frozen, speechless, and awestruck...it was hard for me to fathom how so much compassion and humility could fit inside such small bodies. To me, this is a testament to the fact that this is a home where love is. 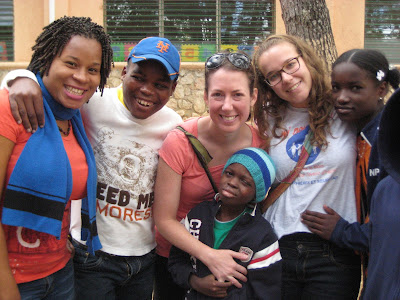