"They were simply becoming a part of this family for the week."

Here is a blog post from Tara Suchland, an adult leader on the Mission Trip to NPH Mexico hosted by Friends' Midwest Region this past July.


Blogging about an NPH experience is a daunting task. It seems as though I’ve done nothing but talk about the trip since I learned I was going, and I certainly haven’t stopped since my return (I’m sure my friends, family, local grocery cashiers…would agree.) However, when sitting down and trying to condense my visit into something that will express exactly what I learned, who I met, why I want Friends of the Orphans to be a part of my life from here on out and still have you reading at the end…well, my words seem to fail me.


I am the Campus Minister at Trinity High School in River Forest, IL. When we were approached by Friends of the Orphans to help organize a Dominican Mission Trip, I about jumped out of my chair with excitement. I was finally going to be able to bring my students on an international mission trip, it was going to be permeated by Dominican spirituality and it would be about building relationships, not houses. It was all I could do not to quote Jerry Maguire when I met Chuck Allworth and Melissa Hoyt (Friends' Midwest Regional Director and Child Sponsorship Manager)… “You had me at hello.”


A couple months later I was Mexico bound with 17 young women (13 from Trinity and 4 from Regina Dominican), our school president, Sr. Michelle Germanson, Megan Alterson, a generous and energetic Spanish teacher, and our Friends of the Orphans guides, Chuck and Melissa. I think we were all nervous and excited and had no idea what to really expect despite the copious amounts of preparatory materials and orientation meetings.


Over the next week I would find myself impressed by my students time and again. They were enchanted by NPH's Casa San Salvador and its inhabitants. No cockroaches, bats, lizards, bug bites or lack of favorite foods could extinguish their smiles. They did chores alongside the pequeños…and looked forward to dish duty. They spent their free time making friendship bracelets with the children, going to the pool, and hanging around in the courtyard with whoever happened to be there at the time. As we stumbled over our Spanish skills (or lack thereof) we fell in love with our godchildren and their friends, and my pride for my students grew.


At one of our evening reflections I asked the trip participants if they recognized what they were doing as “service”. They tossed around the idea for some time. They weren’t really “doing” anything. There was no tutoring, painting, building, filing, no chores that didn’t correspond to some type of mess they helped to create. They were simply becoming a part of this family for the week. The students were struck by how each person at Casa San Salvador who crossed their paths said hello. They took time to talk to each other and take care of each other because they were family. In the end, the students agreed, yes, they were providing this community with something important: friendship, affection, love. It was service. But they also agreed that this service wasn’t going above and beyond. It was something they should be doing at home. Being more present to those around them, being more helpful in their communities, taking time to be with each other. It was just so much easier to do with these people, their godchildren, who lived this way each day because they are a part of NPH.


So, as far as service trips with my students go, this one was a great success. Each person on the trip became a minister. I wasn’t merely a chaperone on this trip, though. Yes, I held onto the key to our room. Yes, I plunged the toilet when it got clogged. But I also had a godchild. As I stood outside the bus when we arrived I remember thinking that my poor pequeño was bound to be disappointed as all of his friends ran up to the young, very cool, teenage girls and he got me, the teacher. However, when our turn came, he didn’t hesitate. I raised my hand and he bolted towards me, wrapped his arms around me and stood there hugging me before I could even say hello. Jonathan, my godchild, is a precocious, silly, mischievous, kindhearted little boy and we quickly became friends. Our bond solidified one morning over a game of Barrel of Monkeys. Yes, what is perhaps the most boring childhood game ended up in fits of giggling and grappling for small plastic monkeys punctuated by screams of, “¡Mis monitos, mis monitos!” (“My monkeys, my monkeys!”) for Jonathan and me. As each of my students pledged to continue their sponsorships and figure out ways to come back to NPH Casa San Salvador, I knew I wanted to do the same thing. As much for myself as for other Trinity students.


There’s so much more I want to include in this blog! Our trip to the water park, the masses with Fr. Phil and the pequeños, our evening trip into Miacatlán for pizza…but I’m afraid I’m becoming that family member with the vacation slideshow. Instead, one final memory. One afternoon we held a forum with a pequeño in his year of service, an ex-pequeño and a young man from Virginia who was part of the international volunteer program. We asked them questions and listened to them talk about their experiences, how they ended up at Casa San Salvador, their experiences, hopes, etc. In the end, we asked them each what their favorite and least favorite part was of being a pequeño. The year of service pequeño first responded in English. He told us that NPH was his home, his family, and he wouldn’t be who he is now without it. Then he paused and said, “nothing”. He didn’t have a least favorite part. The second response came in Spanish. It was very much the same. NPH had taught him to care for people. It didn’t matter if they had been a part of NPH…if you see someone who needs help, you help them. That’s what NPH had taught him. It was a gift – just like his education had been. Then, he too paused, and said “nothing”.


Each one of us on that mission trip felt the same way. Our experience at NPH had given us a glimpse of this huge family and what it must be like to be a part of it. As we return to school, and see each other in the hallways, we smile and still feel a great connection with our friends at NPH. We talk about the NPH report cards that hang on our refrigerators at home. We’ve been welcomed into Casa San Salvador and, in turn, we will share its story with anyone who will listen. 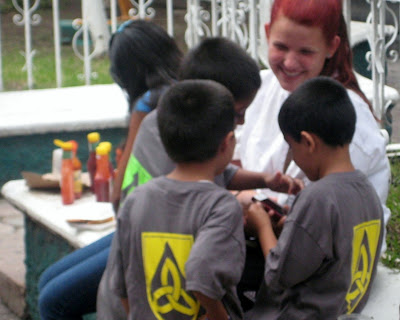 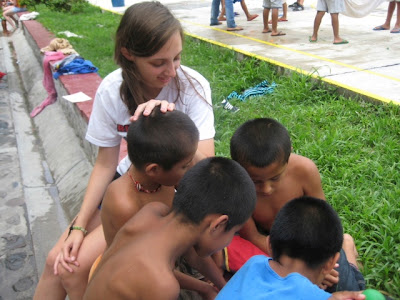 Dominican Mission Trip participants learned that sometimes serving others is as simple as forming relationships.